The Cornbelt Fire Protection District was established in 1953. The founding board of trustees were L.O. Dollahon, Jim Cambell, and Harold Hannah.

1980: Members pictured with the new Engine 50. The department now has approximately twenty members.

The station received an updated face lift in 1985. The district added three bays and office space to the north side in the late 1970’s. Unfortunately, no pictures are available.

1996: Department photo with the new addition of administrative assistant Carleen McCormick and the Paramedics courtesy of Arrow Carle Ambulance as a result of the contractual agreement between Carle Hospital and the Board of Trustees.

The trustees were once again faced with the growing demands of the district and added the latest station addition, completed in 2002. The members now total 55 and a response volume of 620 calls as of 2004. 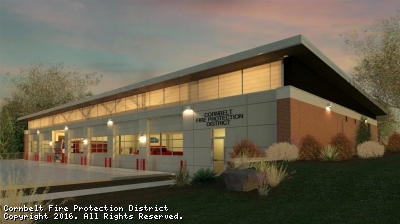 In October of 2016 The Cornbelt Fire Protection District moved equipment into the newly constructed seven-bay fire apparatus station along Franklin Street that will allow for the continued growth of the department. The addition of this building will also give the department some much needed flexibility for it's daily operations.

This site has been viewed 222,475 times.
News
Events
Pictures
Apparatus
FollowTweet
Maintained by the members and staff of Cornbelt Fire Protection District. Designated trademarks and brands are the property of their respective owners. Copyright © 2006-2022. YourFirstDue Inc. All Rights Reserved. Content on this web site is supplied by Cornbelt Fire Protection District. YourFirstDue Inc. cannot be held responsible or liable for any content, text, pictures, or any other media found on this web site.
Management login
Powered by