2201 has a mobile workstation allowing it to serve as a unified command post for large scale, multidisciplinary incidents. It carries up to date pre-plans and critical incident checklists for identified hazards in our district. It also carries equipment to deploy a landing zone for AirLife 1, radios to communicate with M-S school personnel and first responder medical equipment.

C2201 is the "Chief's Buggy." It is utilized by the fire chief or another chief officer in his absence. It responds to any incident that requires a command presence
2251 E2251 is first out on CO investigations, gas leaks and is our first out mutual aid engine. It is also equipped with basic life support EMS equipment.
2253 1995 Pierce 6x6
Engine 2253 is a 1995 Pierce 6x6 pumper built on a Freightliner chassis with a Caterpillar 3126 motor. E2253 holds 1000 gallons of water and the "pump and roll" Waterous pump is capable of pumping 750GPM. It features a front bumper-mounted remote control monitor and 180-degree spray heads mounted under the front bumper for grass and field fires.

E2253 is our first out brush and wildland truck. It also can be utilized for structure fires or as a water tender.
2257 2014 Alexis
Engine 2257 is a 2014 Alexis built pumper on a Spartan Gladiator chassis with a Cummins ISX 500HP engine. It features a 1,500 gallon tank with a 1,500gpm Waterous pump and an enclosed pump panel with a remote controlled monitor.

Engine 2257 seats a crew of 5 and is first out on all reported structure and vehicle fires in our district.
2261 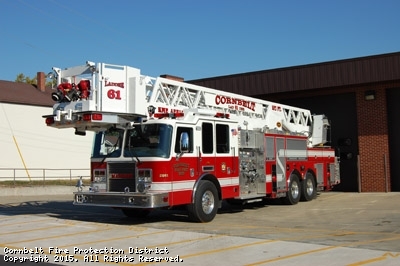 2006 KME Predator 102' Aerial Cat
Ladder 2261
2006 KME Predator with a 102' Aerial Cat platform ladder. L2261 has a 500 gallon water tank and is capable of pumping up to 2000 gallons of water per minute. It has multiple master streams and a wide complement of ground ladders and technical rescue equipment. It seats 6 firefighters.

L2261 responds to all structure fires and high angle rescue calls in our district. It is also responds mutual aid for all ladder truck requests in the western half of Champaign County.
2268 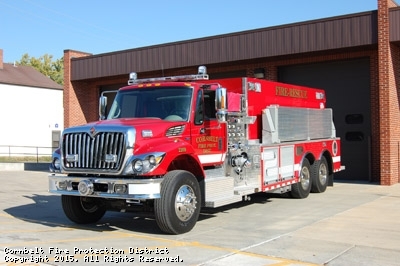 2010 Alexis/International
Tender 2269 is a 2010 Alexis built Pumper/Tanker combination on an International Chassis. With a Navistar GDT-350 350hp engine, 2269 hauls an impressive 3,000 gallons of water and a 3,000 gallon portable water tank. A pump-and-roll Waterous 1,250 gpm pump gives this truck extreme versatility.

With a crew of 2, Tender 2269 responds second out on all fires in the district. It is the "hydrant truck" for in-town operations, and serves as the primary water supply for all rural operations.
2271 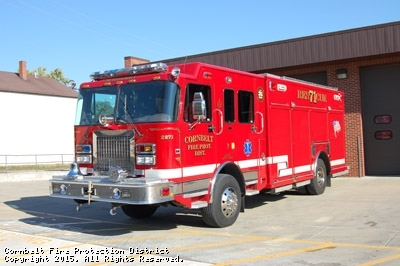 2001 Alexis
Squad 2271 is a 2001 Alexis Heavy Rescue built on a Spartan Gladiator chassis. It has a 505HP Caterpillar C-12 engine with a 4WD transmission. Pair that with the OnSpot automatic tire chains and the Ramsey 12,000 pound winch and this truck is capable of going any place that duty calls with a full crew of 6!

S2271 doesn’t carry or pump any water, but it carries anything else we could possibly need in a pinch. A tremendous amount of thought and planning went into the construction of this truck. Rescue operations are something Cornbelt has taken very seriously (since even before Marty Robbins played his show at MSHS to raise money for our first set of Hurst tools)! Equipped with a full set of hand tools, irons and a thermal imager, it serves an important support function at a structure fire. To support its main mission, S2271 is stocked with a full set of Hurst hydraulic tools and rams, Rescue-42 tele-crib struts, a variety of cribbing and an array of 21, 26 and 34 ton lifting airbags. It’s also equipped with ag. rescue equipment, including a steel grain rescue tube, harnesses, ropes and a Stokes rescue basket.

S2271 has a 30’ telescoping light tower bright enough to bring daylight to even the darkest of nights. It is equipped with BLS emergency medical equipment, a mass casualty kit to handle emergencies with many patients and a landing zone kit for AirLife 1. The EagleAir breathing air compressor and cascade system on board can fill SCBA tanks in the field and there is a small refrigerator on board to keep our personnel cool and hydrated on long incidents. Also to assist with rehab is a side mount canopy that can be deployed to create shade.

S2271 is our front line rescue unit, automatically responding to any rescue type incident. It also responds to all structure fires, mutual aid requests and is a MABAS asset available for statewide deployment in the event of a catastrophe.
2275 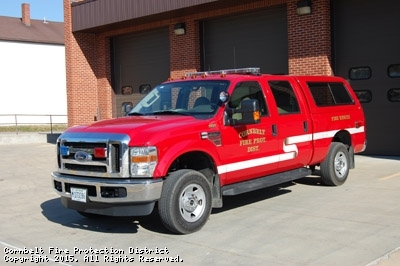 It is staffed 24/7 with a Paramedic and responds to all medical emergencies in the district. It is equipped with advanced life support equipment allowing us to provide the highest level of pre-hospital care until an Arrow Ambulance arrives on scene from Champaign.
2281 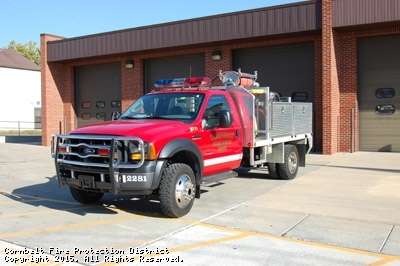 A KimTek MedLite rescue unit allows the UTV with Paramedics and EMTs to access and transport patients who are injured in locations inaccessable to normal vehicles (most parts of the Mahomet bike trails, some parts of Lake of the Woods, Riverbend, etc.)

It is also equipped with a bumper mounted Warn Vantage winch that has been used several times to remove injured patients from steep embankments safely.

2282 can often be found with a crew cheering on the Bulldogs for MSHS home football games.
2285 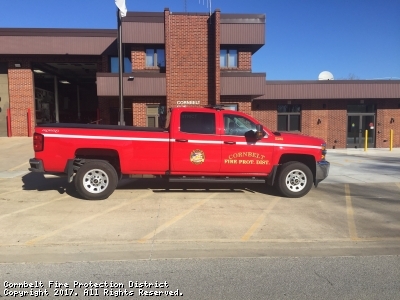 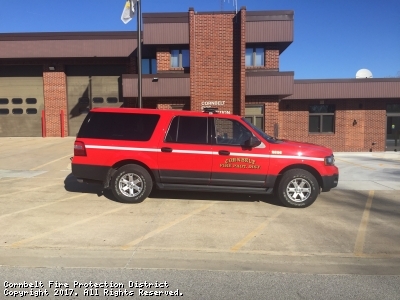 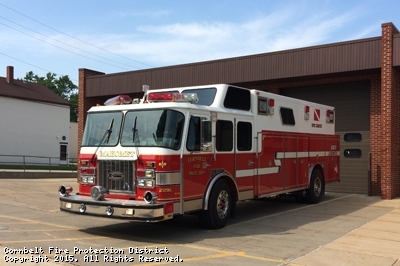 1992 E-One Walkthrough Heavy Rescue with a Detroit Engine. R2295 seats up to 9 personnel and features a Quickset halogen light tower, Honda EU2000 generator, Hammworthy breathing air cascade which can fill SCBA or SCUBA tanks and can be utilized as a mobile command post.

For its primary mission, R2295 has a full suite of dive, water and ice rescue equipment and carries gear to suit as many as 8 divers at any given time. It carries 16 SCUBA tanks and 2 pony bottles, in addition to numerous ropes, floats and air bags. Also on board is an Oceanid inflatable rescue boat and an OceanReef underwater communication system so our divers are able to remain in voice communication with the shore team during operations.

Dive/Water Rescue 2295 is automatically dispatched to all reported water rescues anywhere in Champaign County, and routinely responds to other counties and Clinton Lake by request.
2298 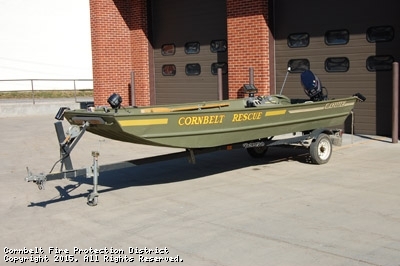 2298 is equipped with a side scan sonar, which is a specialized device that allows us to scan and "see" the bottom of whatever water it's in. It is also equipped with multiple 500,000CP spot lights and can support our OceanReef underwater comm. system.
Engine 52

1961 Alexsis
Engine 52 is a 1961 International Harvester front mount pumper built by Alexis. It is the first apparatus Cornbelt purchased from Alexis, beginning a relationship that is still going strong today. Engine 52 served us well for 30 years and was sold to another fire department. After a 24 year vacation away from us , Engine 52 was completely refurbished by Alexis and unveiled at a ceremony in June 2015. It will serve as the department's parade truck.

Engine 52 was donated back to the department in the memory of longtime firefighter Kenneth Stahl by his family. It is dedicated to the Jay and Morris families for their years of tireless service to the Cornbelt FPD and the residents of our community.
Facebook Timeline
Upcoming Events
Every 1st Monday
7:00pm
Department Training
Every 1st Wednesday
6:00pm
Officer Meeting
Every 2nd Monday
7:00pm
Driver/Operator Training
Twitter Timeline
cornbeltfire
Picture Gallery 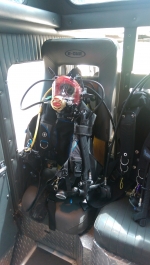 FollowTweet
Copyright © 2006-2021. YourFirstDue Inc. All Rights Reserved. Designated trademarks and brands are the property of their respective owners. Content on this web site is supplied by Cornbelt Fire Protection District. YourFirstDue Inc. cannot be held responsible or liable for any content, text, pictures, or any other media found on this web site. Maintained by the members and staff of Cornbelt Fire Protection District.
Management Login
Powered by